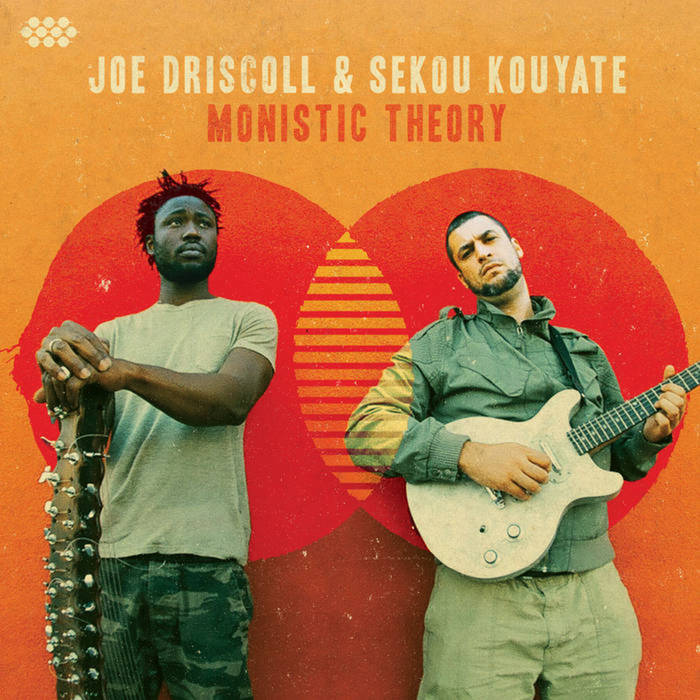 "African, funk and rap influences combine in an energetic performance that ends with a powerfully political surge. They have developed into a tight, attacking unit, in which the virtuoso kora work is integrated into sturdy playing from the band. Exuberant virtuosic fusion."- The Guardian

Joe Driscoll & Sekou Kouyate’s electrifying second album, Monistic Theory, derives its title from the concept that reality is a unified whole and that all existing things can be ascribed to or described by a single concept or system. It's an apt philosophy for this boundary-crossing collaboration, one that brings together two musicians from vastly different backgrounds in search of the commonalities that are uniquely revealed by artistic expression.

Joe Driscoll has gained fame over the last decade for his unique blend of folk, funk and hip-hop. Sekou Kouyate, from Guinea, is one of the most innovative and virtuosic players of the kora, the 21-stringed West African harp. When these two seemingly disparate artistic forces are combined, an incendiary musical reaction takes place. "Our styles are totally different but complementary," Driscoll explains, "It's like putting baking soda and vinegar together."

Joe and Sekou first met in 2010 at a festival in Marseille, France and this explosive combustibility was evident in their jaw-dropping live shows and energizing debut album, Faya, which was released by Cumbancha Discovery in 2014. Performing as a quartet, backed by drums and bass, Joe & Sekou have performed at hundreds of festivals and venues across Europe, North America and Africa, earning rave reviews whenever they set foot on stage.

It hasn't always been an easy ride. Music may be their common language, but that doesn't help much with the day-to-day communication needed for touring, recording and promotion. Visa issues have provided a harsh reality check to their utopian vision more then once. Add to that the fact that Sekou's homeland was a victim of the Ebola crisis for over two years, making anyone traveling with a Guinean passport a target of excessive scrutiny. Once, when driving across the border from Canada into the US, the band was detained by border agents in HAZMAT suits, refusing to let them enter the country until they were cleared by medical personnel. A group of spirited, creative people stuck together in a small van for long stretches of hard touring will do more then anything to put the unifying power of music to the test.

Yet no matter what happens behind the scenes, the minute Joe & Sekou get on stage or in the studio, all of the travails of daily life in the music industry fall away and magic erupts. While their personal histories and personalities are quite different, there is an undeniable music-umbilical connection that connects these two brothers from another mother. When Joe & Sekou make music together, there is a chemical reaction that is impossible to explain and even more difficult to restrain.

Joe & Sekou's sophomore album, Monistic Theory was recorded at the Cumbancha studios in Vermont during one of the coldest winters on record. While the weather outside was frightening, the studio was ablaze with Kouyate's scorching kora licks, Driscoll's lyrical acrobatics and the potent rhythmic underpinning of drummer Jimbo Breen and bassist John Railton. After years of presenting their high energy, broadly appealing show to stages across the world, the ensemble had settled into a deep groove. This dramatic evolution and solidification of their musical interaction is clearly evident on Monistic Theory, which features a selection of tight, catchy, and funky songs.

The album opens prophetically with the sound of trickling water and the voice of Oren Lyons, a Native American author, activist and Faithkeeper from upstate New York, near Joe Driscoll's hometown of Syracuse. "Water is life, water is the foundation of life. It is life. We are water," muses Lyons. From there it's off to the races of the instrumental opener "Tamala," as Sekou Kouyate's fingers fly effortlessly across the kora like water trickling over rocks in a mountain stream.

The album's second track, "Just Live" finds Joe Driscoll waxing poetic on his philosophy of life. "Now history's a mystery with the ages unsung / We've forgotten all of their myths, even our mother tongue / Some folks learn to compete, others love to create / Some could eat until content, and yet they leave a full plate … So keep your minds in the moment, the moment in the mind / Open the doors, raise the blinds, cause it's about time / Just live." Rarely has there been such a head-bobbing life lesson.

"Tokira" is Monistic Theory's sing along anthem, the song that will have lighters held high at future concerts. With "Tokira" Sekou reveals he is not just a kora virtuoso, he's also a talented songwriter with a gift for crafting a great melody. Driscoll's lyrics give the song added poignancy, as he reflects on what his 10-year old self would think about where life has taken him so far.

Other highlights on Monistic Theory include the jaw-dropping kora playing on "Barra" and the inspirational and timely call for unity on "Rising Tide," on which Driscoll sings over a children's chorus, "When we realize / There'll be nowhere to hide / They can't divide once they see we're all one tribe." Driscoll continues to provide words of wisdom on the dreamy jam "Badiya," reminding us "Whether you break or bend / Whether you fade or mend / The only true salvation is love in the end."

The album ends with a live, instrumental cover of the Stevie Wonder classic "Master Blaster," although you've surely never heard it played quite like this before. Recorded in front of packed house at the Westcott Theater in Syracuse, New York on a hot summer night, the track demonstrates the remarkable musicianship and unstoppable groove of this astonishing pairing.

There's been a lot of water under the bridge for Joe & Sekou after over five years of collaboration, and neither of them could have predicted that night they met in Marseille that they'd still be making music together this far downstream. "I met Sekou, and I said, 'Hey, man, let's work on this for a while.' It was one of those 'follow the river' things, and I went with it," Driscoll recalls. With Monistic Theory, Joe & Sekou reveal that their odyssey is far from over, and if their fans around the world have anything to say about it, it’s a voyage that will continue for years to come.

Bandcamp Daily  your guide to the world of Bandcamp

Cannibal Corpse's George "Corpsegrinder" Fisher stops by for an interview